WTC Final: The ICC World Test Championship Final between India and New Zealand has finally started today. In Southampton, New Zealand captain Kane Williamson has won the toss and decided to bowl first. The Indian did not make any changes in the playing XI. In the first session, Rohit Shubman Gill started very well and did not give any chances to the New Zealand bowlers. Both shared a 62-run partnership in the first one and a half hours. However, then New Zealand made a comeback by taking the wickets of Rohit and Shubman. Till lunch, India has scored 69 runs for the loss of 2 wickets.

New Zealand won the toss and chose to bowl

After a delay of a day, the final was finally tossed and the New Zealand captain decided to bowl first while betting here. The Indian team did not make any changes in the playing 11, while the Kiwi team has landed without any spinner.

The challenge for the Indian openers was not easy, considering the rain of a full day and the clouds over the ground even today. The Kiwi bowlers could not take advantage of this and Rohit and Shubman added 62 runs for the first wicket for India.

Dark clouds are still hovering over Southampton, but at the moment the situation looks good for the match. Both the teams are ready for the final and are meeting each other before the start of the clash.

India has not made any changes in its playing XI, while New Zealand has landed without any spinner, unlike India. 4 Leading fast bowler and all-rounder Colin de Grandhomme. Here is the playing XI of both the teams-

The Indian team came out wearing a “Black Band“

The whole country is in mourning due to the death of legendary Indian sprinter Milkha Singh. In Southampton, the Indian team entered the final with a black band in their hands in honor of Milkha Singh.

#TeamIndia is wearing black armbands in remembrance of Milkha Singhji, who passed away due to COVID-19. 🙏#WTC21

Gill hits the first boundary of the WTC Final

India’s first four has come in the sixth over. Trent Boult bowled a short pitch ball to Shubman Gill, there was not enough bounce in the ball that Gill would have had trouble. The Indian batsman got the first four of the innings at midwicket with the help of his excellent pull shot.

Rohit out on the first ball against Jamieson

New Zealand is making a comeback in this session and this time India has got another setback. Left-arm bowler Neil Wagner, who came to bowl for the first time in the match, has taken the wicket of Shubman Gill. Wagner’s ball was right on the line of off-stump and was going outside making an angle. Gill defended it on the front foot, but took the edge of the bat and was caught directly to the wicketkeeper. India has lost the wickets of both the openers within just 1 run.

Another Indian batsman’s helmet has been targeted by New Zealand. Neil Wagner has been trying to trap Pujara on the short ball for a long time. This time Pujara tried to pull, but the ball came faster and jumper than expected and hit his helmet. The ear guard part in the helmet is broken. At present, physio Nitin Patel is examining him. The Indian team will pray that the situation of concussion does not come. Earlier, Jamiesar’s ball was hit in the helmet of Shubman Gill.

Everyone shocked by the decision of the umpire

The umpire’s decision on the appeal against Kohli in Boult’s over has taken everyone by surprise. The umpire had not given any decision earlier. New Zealand also did not take the review. The catch was also taken behind the wicket, so what did the umpire ask for help from the third umpire. This question is troubling everyone and former Indian opener Virender Sehwag has also expressed surprise at such umpiring.

Funny umpiring there with Virat.
No decision given by the umpire and it automatically became a review.
Tuning in to the Women’s test match for the time being , hoping for Harman and Punam to save the Test match.

New Zealand has landed in this important match (WTC) with its tried-and-tested fast bowling attack formula. The team has 4 leading pacers, while Colin de Grandhomme is a medium pace-all-rounder, no spinner. Obviously, this has not been digested by many and great Australian spinner Shane Warne has expressed his disappointment. He tweeted and wrote that spinners will be helped on this pitch because footprints have started forming from now on.

Very disappointed in Nz not playing a spinner in the #ICCWorldTestChampionship as this wicket is going to spin big with huge foot marks developing already. Remember if it seems it will spin. India make anything more than 275/300 ! The match is over unless weather comes in !

Tim Southee, the most successful bowler in international cricket against Virat Kohli, has come on the attack for the first time in this session. Saudi almost trapped Kohli with the best ball. Saudi’s ball pitched on the line of off-stump and Kohli tried to defend it, but went out swinging very close to the bat and went to the wicket-keeper.

Spectacular view before the final

WTC showed something like this on the field before the final started. (Photo: ICC) 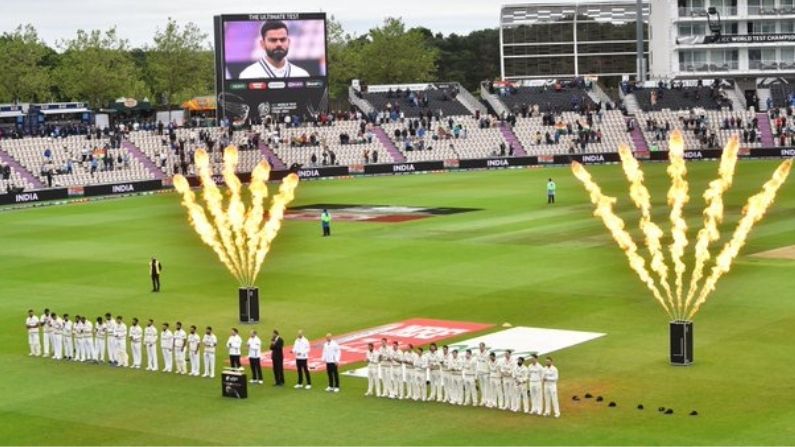 The game of the third session starts late

There is no good news coming out of Southampton at the moment. The situation has still not improved after the game was stopped due to bad light. Due to this, the game of the third session will now start late. After playing almost two sessions without any problem throughout the day, this situation will increase the concern of the fans in the third session.

UPDATE – Start of play in the final session has been delayed due to bad light.#WTC21 pic.twitter.com/PQH2dHiHq8

The stumps have been declared without the completion of the second day’s play in Southampton. In the third session, the game did not resume after being stopped for the second time and the umpires declared the stumps. India scored 146 runs for 3 wickets at the end of the day.